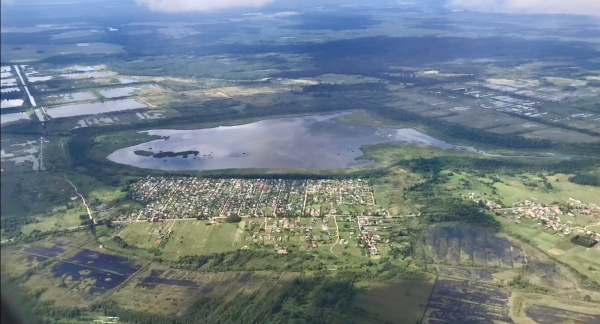 While sandwiched between my father and a non-English speaking relative I had never met before in the backseat of a stuffy, late model BMW, I saw storks standing in soft rolling fields and neatly tiered cemeteries and had the certain thought this must be a dream. We aren’t really here.

But I have never been uncomfortably warm in a dream nor registered smells like sunbaked dashboard and smoldering diesel. Twelve plus hours of travel and we really were in Lithuania.

At a stoplight, the driver offered my grandmother a dusty tin cup rummaged from the glove box. She said something in Lithuanian and he wiped the cup with a marginally less dusty rag before filling it halfway with mineral water. My grandmother gave a shrug and tipped her head back to drink and I, thirstily in the back seat, thought she’s home again.

We stopped in the town of Trakai and ate Kibinai, a pastry with a neatly fluted crust and meat filling. We waved away bees at an outdoor café overlooking a lake and 600 year-old castle I had only ever seen before in a painting in my grandmother’s house. I’m sure I never thought it was real. 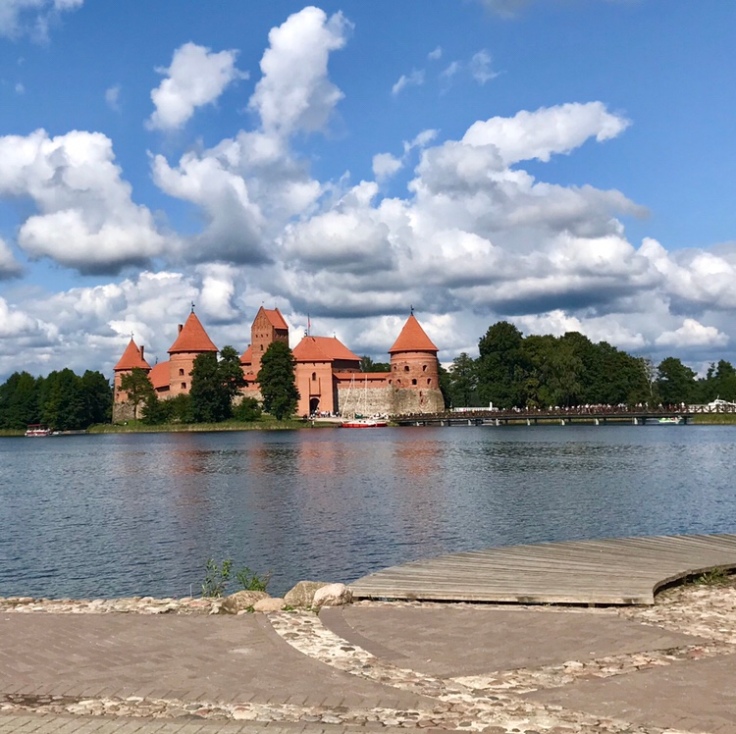 My dad and I followed one of the relatives inside the castle and climbed an incredible labyrinth of stairs leading to warm rooms, always stuck behind a large foreign-speaking tour group. This would become a theme for the week: not understanding what anyone is saying and sweating and thinking I can’t believe we’re really here!

My grandmother was pretty amazing. She will be 92 next month and easily boarded countless shuttle buses and climbed more stairs in a week than she has all year. She visited 9 family graves in 4 cemeteries and climbed into and out of a Volkswagen Vanagon something like 18 times. And she was the life of the party at the 7 mini-reunions we had over the course of 8 days.

She always had an arm to hold onto and help when needed. Her (my) family was so good to her (us). In one of the bigger cemeteries, one of the men we were with turned a collapsible walker with a seat and his leather belt into a makeshift wheelchair he and another man pulled along the paved path.

Let me tell you about the cemeteries. I always thought my grandmother’s preoccupation with visiting graves and planting and pruning flowers and bushes around them was a bit unusual and, well, unnecessary. Then I saw a woman carefully washing the marble border around a graveside shrine after raking the stones inside and understood.

It turns out Lithuanian cemeteries are nothing like US cemeteries. They are like serene parks in heaven or some other majestic planet. It might be a European or Catholic thing, but cemeteries are revered and holy and pristine.

You are never alone in a Lithuanian cemetery, even if everyone has their head bent down pulling weeds or lighting candles. The dead are gone but visited often. Many graves featured photographic images of loved ones, not unlike the kind you can get printed on t-shirts at the beach. I saw a sign at one cemetery with the word Fotokeramika in big letters and worried it prohibited photography. But I google translated the rest and realized it was just telling people who to contract to get photographs of their loved ones printed on graves.

I took a lot of pictures in cemeteries. I photographed relatives’ names and dates on markers for future genealogy searches. I photographed living relatives standing around or behind graves, my grandmother in every picture, no one smiling exactly. 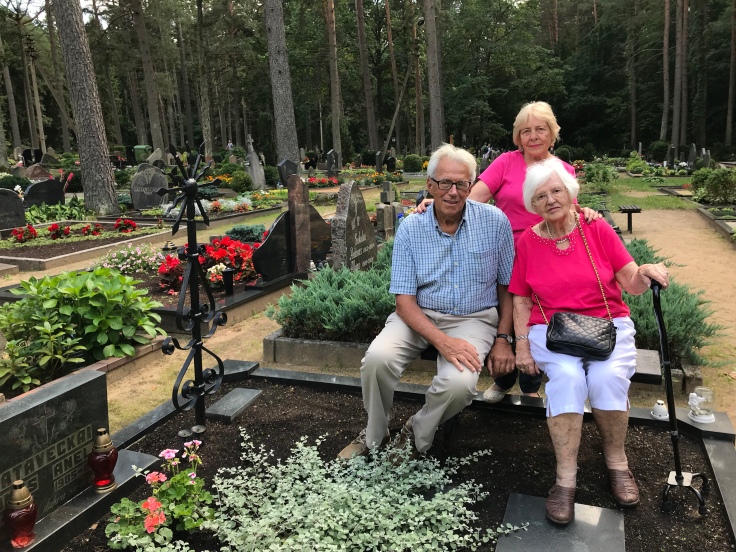 Truthfully, my father and I were a little tired of cemeteries by the third one. But that was the one where my grandmother gave a tearful speech, only partially in English, about why she fled the country, her home, after the Russians had run out the Germans and called it liberation.

She cried again when we drove down a gravel road crammed with houses that used to be her parent’s farm until the Soviets took it. We sat inside the church where she married my grandfather. Their marriage did not last and while the original church survived WWII, it was dismantled and repurposed by the Soviets before being rebuilt in the early ’90s.

I didn’t love the village like I thought I would. The people were wonderful but I expected to feel some connection to the town since my mother was born there. Knowing the dark history – the genocide and suffering – left me feeling a bit heavy and flat.

I was more than ready to move on to the Devil’s Museum in Kaunas. Everyone wanted to understand why it was so important to me. Why have I wanted to go there ever since I was a little girl? I don’t know, why did I buy a small skeleton devil at CVS yesterday? Why not? It’s like asking why you love cats or dogs or musicals. You just do or you don’t.

I almost didn’t get to see the Devil’s Museum at all, but mentioned it as an aside to one of the younger, English-speaking relatives and the next thing I knew all 12 of us were crowded into the lobby buying tickets for 3 Euros each or something ridiculous like that. 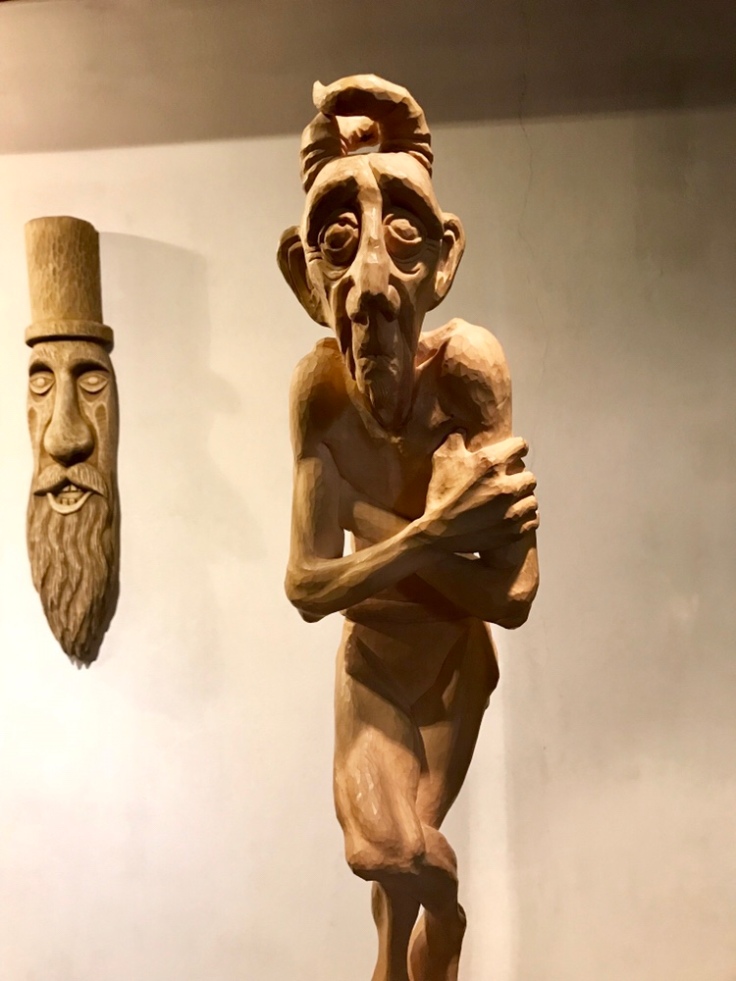 It was awesome and so was the Devil’s Museum. I took 5 million photos (all of which I am going to show you right now…) and when I missed a good devil, a cute little 3 year-old spitfire we were traveling with pointed her chubby finger and said Fotografuok and I did. And then I had to show her the photo on my phone screen and she would nod and then we could proceed. It was her first visit to the Devil’s Museum too and she will probably not remember it but may one day want to go back and not be able to explain why.

My grandmother got to see her cemeteries and I got to see my devil’s museum and my dad got to see his KGB museum, which sounds cool and was, but it was also very sobering. When I think KGB, I think eavesdropping room (pictured above), but not necessarily basement prison and execution room for resistors. The execution room had bullet holes in the wall and a glass floor with personal effects like jacket buttons and wire rim glasses on display below.

As an American, I take freedom for granted. When Lithuania fought and regained independence in 1990, I remember a festival in Baltimore I didn’t go to because I was in high school and had to work or smoke cigarettes in the woods with my friends. It meant little at the time except there goes my grandmother with her fierce Lithuanian pride. I was and continue to be an idiot, yes, but I get it now.

And oh, the spirited hospitality of Lithuanians. We slept in comfortable beds (you get no top sheet but do get your own duvet in a double bed!) while one host slept on a bedroll in the kitchen. We were driven a maddening number of kilometers by men who would only occasionally and then begrudgingly accept reimbursement. Even their cats were attentive and sidled up for pets, purring in Lithuanian.

We feasted on garden grown fruit and vegetables and salmon caught on a fishing trip to Norway. We slathered backyard honey on homemade cheese. I never ate so good and craved so little, except maybe water. It started with the dusty tin car cup and an unfounded fear of tap water and ended with me falling in love with the salty mineral water which tasted like warm ocean the first time I drank it but became my favorite thing that I can’t get back home. Our mineral water is a joke.

We spent our last couple of days in Vilnius at the airbnb apartment I wrote about last post. It was excellent, by the way, and I don’t think anyone looked in our windows because they had some special anti-peeping tom coating. It also had metal shutters you could put down at night that were very Get Smart. We never did since air conditioning and fans aren’t a thing over there that I could tell. As for the streets of old town Vilnius, google street view couldn’t hold a candle to the real thing.

On our last day in Lithuania, my dad and I climbed a steep cobbled hill to Gidimenas Tower, where I coughed up at least one lung due to some ailment I picked up just before my trip even though I hadn’t been sick in 2+ years. 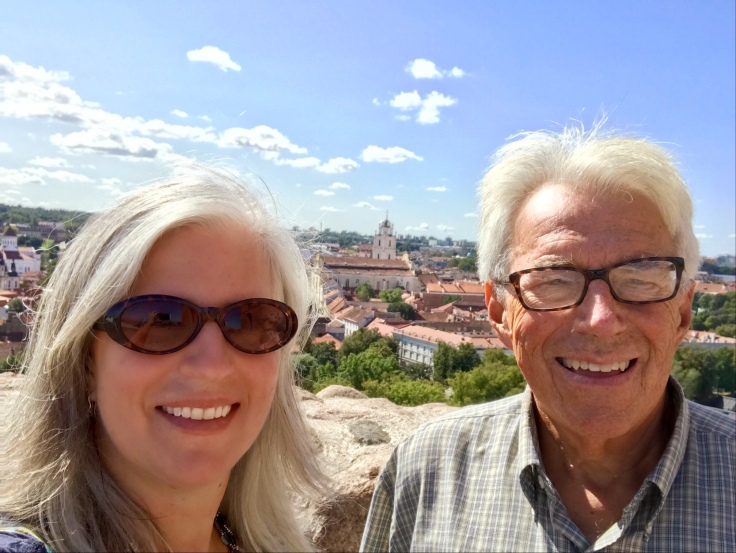 That reminds me, I’m glad I didn’t take this trip newly sober. I was offered shots of strange liquor at least a dozen times. I had to put my hand over my coffee cup once to keep a well meaning but not-getting-it host from pouring in booze to help my cough. They like to drink over there and no amount of polite refusal seemed to reduce their bewilderment or suspicion. I insulted them by not drinking and experienced the irony a teetotaler knows well.

Our travel went remarkably well until the final leg home, most of that after we landed at Dulles. There were extra long lines at customs due to new face recognition technology and then some guy took my suitcase and didn’t realize until after he got to his hotel. We were all fried by the time my dad and I dropped my grandmother off and drove home.

I was a little nervous about talking to my grandmother on the phone after a few days of recovery. I wanted her to be as satisfied with the trip as I was.

The first thing she said was my father and I left her house so fast after the airport, it was like we were on fire. We didn’t even sit and have something to drink, which I now know to be a great insult to a Lithuanian.

Also, she couldn’t believe she didn’t come back with any Lithuanian bread or cheese or candy. We didn’t get to see the Hill of Crosses either, she reminded me. I couldn’t tell if she was complaining or trying to prepare me for another trip.

I might be able to find the bread and candy online, I said. I just want to enjoy this trip for awhile. She wanted to know if I ever wanted to go back. Definitely, I said. One day I will take my daughters so they can take theirs, and so on.