I never was an athlete. In elementary school I did cheerleading. I was always the pyramid base, not because I was strong but tall and graceless. I tried out for cheerleading in freshman year, fully aware who my competition was. It wasn’t the popular peppy girls but the skinny awkward girl and chubby awkward girl. We all made the team when the coach didn’t have the heart to cut just one of us. I lasted through basketball season and long enough to overhear someone in the crowd say I looked stoned. I wasn’t, but I finally saw what everyone else did.

The next year I tried volleyball and discovered I was afraid of the ball and had an uncontrollable tendency to swear because it never went where I meant it to.  This worked to my advantage via a killer underhand serve that never landed where anyone expected it to. I once scored ten consecutive points for my team with this serve. I was so proud. (We still lost.)

Walking and bike riding were solo acts and more my speed. I zipped through intersections on my ten speed without stopping and never wore a helmet. I only wiped out that one time when a squirrel ran across my path, but that was in elementary school and happened in front of my crush and the neighborhood bully. He’s probably still imitating me with that horribly exaggerated limp.

I only started to run after I got sober. I was walking a regular route one day and thought ‘this is taking too long’ and ‘how many times am I going to make up stories about why that bunny statue moved from one neighbor’s yard to another’? It was the perfect storm of restless energy and boredom on a seed already planted by runners who were finding challenge and reward.

The thing is I’m a naturally slow runner. Really more of a jogger, except it’s not the 80s anymore. Runners PR and track splits and wear adorable water bottles that attach to your hand like a glove. They join running clubs and collect race bibs and safety pins. They use apps that don’t just remind them they haven’t PR’d in a long while.

I stopped running regularly in spring when I started earlier work hours and a longer commute. I walked during lunch, occasionally jogging back to my car because I’d underestimated how long it would take. I still ran on weekends and called it enough.

Then my oldest daughter joined high school cross country. All those lies I’d told her about running – that you should run for the fun of it, that it doesn’t matter if you’re not the fastest – well, they were exposed. She discovered her genetic predisposition to limited lung capacity or maybe it’s an aversion to competitiveness and shin splints.

It broke my heart to see her struggle and, worse yet, know what it’s like to be slow. There is no glory in last place, even if all you cheerful types remind us we’re doing laps around those still on the couch. I should add that she toughed it out and rarely complained and set an impressive one-mile PR. And she was glad when the season ended.

Neither one of us have run much since November 8th, though that was my favorite race to date. I know, none of it makes sense.

My favorite race was along the same bridge I ran last year. I wrote about it here. This year my daughter ran it too. That’s what made the run special. At 14, she’s sweet and smart and funny and a delight to spend time with.

We both decided we mostly didn’t  give a rats ass about our time. We jogged and joked and marveled at the bay down below and the 10 year-olds that passed us by. Occasionally we sprinted, though walked a good bit and stopped for selfies at the top. It was a joy.

This is the year I slowed down and stopped running all the time. It’s hardly the end of the world. 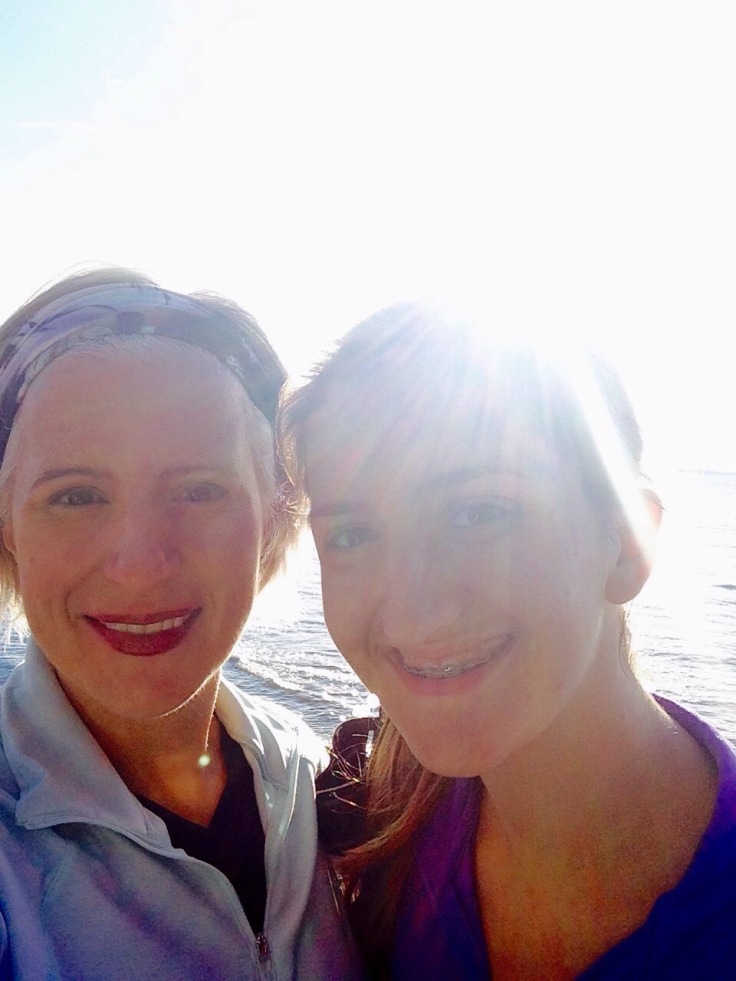 #toadally
Last batch of late 50s luau photos. My aunt is in the last one holding a glass of punch and probably planning her escape route.
#outfits #keepyourpawsoffmygrassskirt
Sometimes I wish I was the life of the party, like yellow-and-green-leis lady. Mostly I feel like the lady threatening the photographer with meat on a stick.