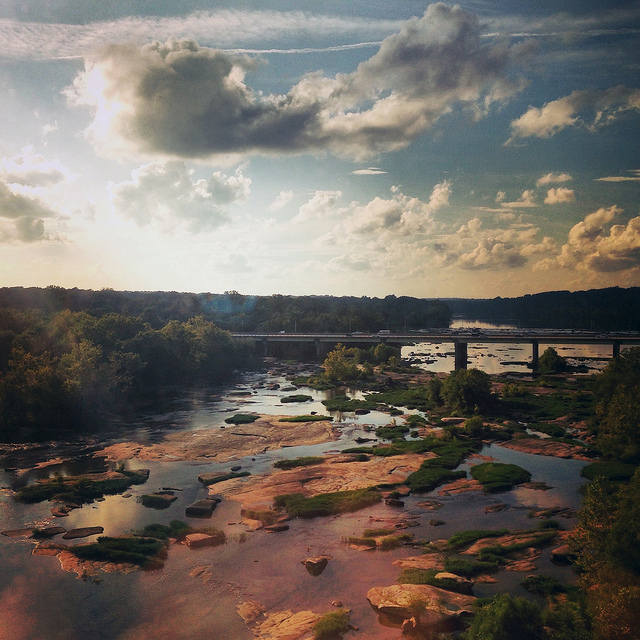 Recently we took the auto train from Lorton, VA to Sanford, FL. The train somehow takes several hours longer than driving, but saves close to a thousand miles of wear and tear on your car and souls. Case in point: we talked to a woman whose husband ran over an orange traffic cone in the wee hours during their drive down, destroying part of their fender and rendering her unable to sleep the rest of the way. They were staying an extra night at Disney just to delay the return trip.

We’ve done the Disney thing more times than I care to admit, but this time decided to save on airfare and spring for adventure by driving. Why not? I had fond memories of the 16+ hour drive from Northeast PA to suburban Chicago when our oldest was just a baby.  Actually, the only thing I remember was playing “the diaper game” in the backseat. (I feel I should explain the rules of “the diaper game”. Player one places a (clean) cloth diaper over their head and removes it suddenly, repeatedly and with pauses of varying lengths. Player two laughs, cries, eventually falls asleep. I  imagine some of you have played before.)

About two months before our vacation, I had a sudden epiphany: Driving 34 hours round trip with two kids in the backseat was a terrible idea! I googled alternatives and learned about the auto train, which delivers you and your car 900 miles away, sparing precious wear and tear and sanity.  We booked two sleeper rooms for about the price of airfare. Train travel is not cheaper nor faster than flying, but it was a unique experience and interesting way to see part of the country.

We boarded in late afternoon and our kids took the room across the hall. I reverted to teenager and listened to sweeping cinematic music on earbuds while my husband watched old episodes of Mr. Show on his laptop. We shared a box of Mike and Ikes. It felt terribly romantic.

Yelp reviewers promised ugly, barren landscapes, so I was pleasantly surprised by sunlit bridges and marshlands brimming with life. We barreled past miles of graffiti, which I happen to love very much. I snapped picture after blurry picture from my camera phone, though some turned out. 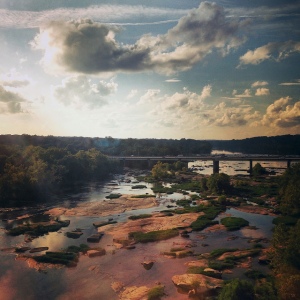 I listened to sappy soundtracks, stared out the window for hours and ate candy. I finally know what my dream job is.

The dining car was pretty swanky. There were white linen table cloths and chinette bowls that looked real but cracked if you pushed too hard with your knife. There were real glass carafes filled with real iced tea and water. Best of all, there were four of us, so we didn’t have to sit with strangers.

Let’s talk about sway, shall we? You know how when you have to stand on the subway or bus and hold onto a filthy pole for dear life? Trains are no different except instead of filthy poles, you grab onto seats and sometimes the people sitting in them. It’s survival, done without much fanfare or apology. You falter, you lunge, you grab with high hopes and minimal eye contact. You mostly stay in your seat to avoid these matter-of-factly-horrifying encounters.

Let’s talk about sleep, shall we? I love to talk about it since I rarely see it otherwise. Sleep and I are like part time lovers. I don’t know what he’s up to otherwise, but we get along pretty well when he comes around. I don’t think he cares for train rides. I laid awake most of the night waiting up, even taking a homeopathic remedy in hopes he too would climb the ladder to the top bunk and smash his head on the ceiling. But I only caught a few dreamy snippets…him sitting across from me in that blue smoking jacket I like so much…him pointing out the picture window at a particularly homey looking hobo camp. Sleep was more snack than meal, but still better than trying to doze sitting up in a car while my husband ran over orange traffic cones.

We arrived whole and mostly refreshed at our destination. Our car met us after a lengthy unloading process and was all “hey what are you guys doing here?” We shook our heads and climbed in and drove him to Disney and later Hilton Head and Home.

The thing I liked best about this trip was the variety. We fought heat and crowds and bickering, but also found comfort and peace and quiet. We rode bikes on the beach and looked for alligators in lagoons. We laughed, we cried, eventually we all fell asleep.

#toadally
Last batch of late 50s luau photos. My aunt is in the last one holding a glass of punch and probably planning her escape route.