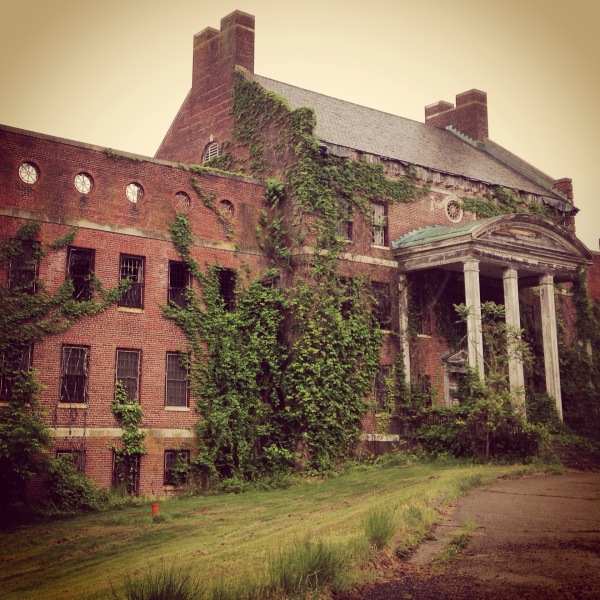 The winter before my oldest daughter turned 4, I spent roughly a dozen evenings in our cold, unfinished basement assembling a dollhouse. The kit was expensive and of good quality. I poured over the directions and ran beads of wood glue and fit the pieces together. I assembled the staircase and stained the tiny hardwood floors. I even hung wallpaper. It was almost as satisfying as giving birth.

Within a week after my daughter’s birthday, her and a playmate ripped the front door right off the frame. The other mother was mortified and apologetic, as if she had done it herself. The break was clean but not repairable. Who needs a front door anyway?

Otherwise, the house held up great over the years, though mostly from not being played with. The height was wrong (too short) or the wallpaper all wrong (too loud) or maybe neither of my daughters were me. I used to sit at a child sized table in my room and play with my dollhouse for hours. My mother’s father assembled it from scratch and drove it out from Indiana one summer. I knew it was coming and awaited its arrival like Christmas. It didn’t even have hardwood floors or wallpaper.

That’s probably where my love of miniatures comes from – the act of love involved in someone creating a dollhouse of my very own – but it took root fast and never left. I only ever built the one kit, though considered many times taking on a more ambitious house. Something taller, for sure, and with gingerbread trim and a sturdier door. Maybe a door would have kept out the poor little mouse that climbed in and died in the abandoned dollhouse in our basement sometime this winter. Is the house haunted now?

This is my other fixation: abandoned houses. Recently it’s taken hold and hard because I work near a park with abandoned structures throughout. An empty mansion, rusted out farm equipment, high arch stone bridge and crumbling spring house. You can pick up a color map at the main office and hunt them like treasures.

The paths are well marked but still a challenge for the map impaired. One day I found myself underneath a bridge I was supposed to be on if I wanted to find an abandoned cottage. The next day I went the right way but found a large grassy mound in its place. I was probably about a year too late, though google maps still maddeningly showed its rotting outline. The red GPS ball hovered over where the old porch used to be. A small white butterfly touched down and any sting of disappointment flitted away with it.

I went on in search of an old incinerator and thought I saw something through the trees but it turned out to be the remains of a stone foundation. I swear it looked like an entire house from the path. Ghost house.

I always see other people when I walk. Most of the solo women have dogs with them. I want a dog but settle for mace and a hatchet (kidding). Do you know a convicted killer once escaped from the nearby psychiatric hospital and they found him enjoying a picnic lunch in the very same park? These days he gets day passes, and probably haunts the local mall instead. 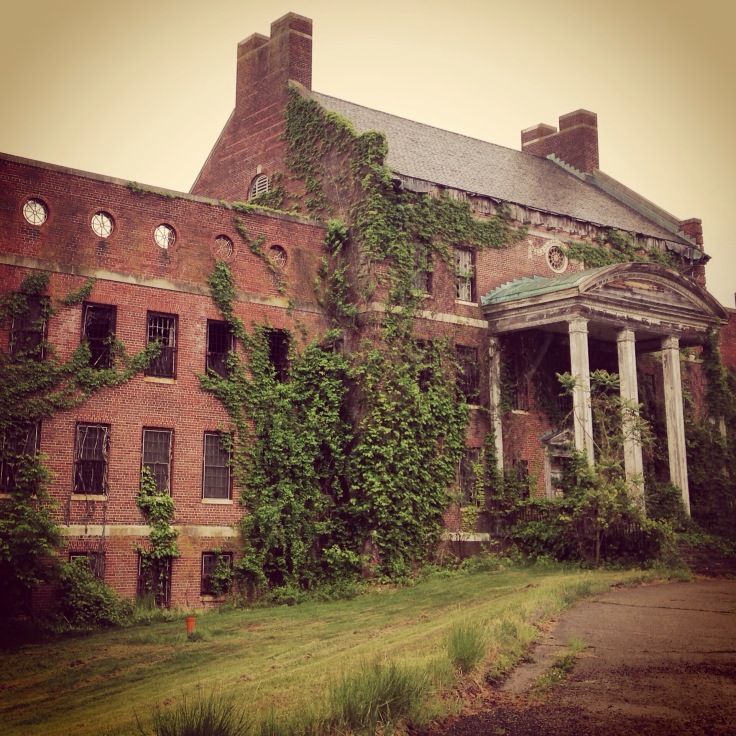 This new adventure may be risky but keeps me from spending money during lunch break. Stores don’t offer treasure like this. The perfect pair of shoes are everywhere, as it turns out, but when is the last time you found a rusted out granary dryer with birds roosting inside?

I can’t explain why old things are so appealing, but of course I’ll try. I suspect it’s because I’m feeling more and more like an old thing myself. The gray hair is coming in nicely, if by nicely you mean gray. I feel much less enthusiastic about it compared to 3 months ago, but I’m committed to seeing it through. This will likely take another year, seriously.

So I’m slowly growing old over here, watching gray creep in like ivy stretching up the side of my favorite find so far. Time is patient and the earth will always reclaim its space. While I could find this disturbing, instead it feels exciting. Everyone gets old. Even you! (sorry) The process can be observed from a safe distance through abandoned structures.

See how ivy stretches up the side, swallowing whole bricks. Note the paint flaked but still fine scrolling trim along the porch with a locust tree sprouting through rotted boards. Take it all in because soon it won’t be there. That doesn’t mean it wasn’t once loved and appreciated. Once it’s gone, it may even be spied through a thicket of trees when the breeze hits just so.

George wears high-waisted tan polyester trousers with a brown belt and keeps a plastic liter of vodka on the kitchen table, which my grandmother carefully wipes around with a yellow sponge before setting out a glass dish with fresh cherries and another with salted cashews.

My brother and I drink cokes with maraschino cherries trapped at the bottom and sneak glances at our new exotic windfall – a drunken grandfather we never knew we had until that day.

We wear street clothes in the middle of a perfectly good beach day, which makes us feel formal and restless, like anything could happen.  George wears his short-sleeved shirt unbuttoned at first and then he is shirtless. He puffs out his chest and pumps both arms to show off his muscles. His body odor seeps into the kitchen and won’t leave.

The strangeness of it all forces me to reassess our other two grandfathers, who had seemed perfectly adequate up to that point.

One grandfather takes me for donuts and coffee at a place with spinning barstools and sugar encrusted coffee rings against gold-flecked formica.  We stare at the donuts behind the counter instead of each other, and this is better than fine.

The other grandfather lets me lie along the back console of his plush Buick – the flat area against the window where he normally keeps hats or a box of travel tissues . We listen to talk radio and wind along the beltway on some fool’s errand to please my grandmother.

Grandfathers in my family are benevolent background, busy cogs that keep family dinners moving. The grandmothers think they run the show but who do they think mashes the potatoes or ducks out to buy them in the first place?

My grandmother tells me George used to pinch my mother when she was a baby so he wouldn’t have to hold her. She couldn’t understand why my mother always screamed and cried until she noticed red welts on the backs of both plump baby thighs.

George puts his hand on my grandmother’s arm when she finally sits down and laughs when she swats it away. She won’t look any of us in the eye. George tells my brother and I to do good in school and listen to our parents without seeming to have any idea who they are.

We never see him again.

A few years later, I find a black and white 8×10 photograph of a man wearing a Viking hat slipped between the pages of a dictionary my grandmother gives me. She says the dictionary used to belong to George. There weren’t many personal effects. He died penniless and his body was not found for several days, even though he was rumored to have a longstanding lady friend. (I picture Faye Dunaway’s character from Barfly.)

The photograph is a close up of the Viking’s face, though I can tell he is at least shirtless and standing in a meadow. He is smiling, victorious, and has a wide gap between his front teeth and wild, long hair.

I will always wonder what the hell happened to that photograph. Losing it will haunt me forever, I imagine.

I haven’t slept in the bed since her mother died in it. She knew I knew, but when other people came to visit, she made it up with fresh sheets and I reminisced how gentle and at the same time firm the mattress was and also how at the moment her mother died, tears poured from both eyes. The bed promoted a deep, restful release.

For years, we slept on it at the beach and swept phantom grains of sand from the sheets with our toes, which later throbbed from smacking the baseboard in pitch black. The headboard was soft grey with rounded carvings like the bad luck tiki Bobby found at a construction site in Hawaii. It had sliding doors and secret compartments perfect for imprisoning action figures and Danielle Steele paperbacks. It weighed more than a tiki and only slightly less than an elephant. One night the bed was carefully disassembled, driven 90 blocks, lugged up a flight of stairs and left in a sharp stucco hallway in a silent argument over who should have it. This is how my family fights.

George did all the heavy lifting, grunting with greasy sweat across his barrel chest and pregnant-swollen belly and still in those terrible tan trousers and brown belt, his attempt to dress up even though it was too hot for a shirt. When we got off the elevator after it was all over, he hung back and dropped into a lunge, stretched out both arms and declared I AM STRONG AS AN OX. The elevator doors started to close and bounced back in the way they always do in that perpetually surprised oh are you still here? My brother and I turned our heads to snicker.

One day I will have to disassemble the bed and ask someone (shirtless or not) to help me lug it to the curb for Purple Hearts. I’ll probably sleep on it one last time and wonder if I’ll dream or find relief from these ghosts.