I’m loading loose groceries into a tiny, ancient rental convertible and waiting for some guy to bring me paperwork so I can leave. Apples roll into the front passenger side, smooshing a shrink-wrapped pack of sausages. I check the time. 6:45am, the same time I’m supposed to meet my sister for the race. I still have a two-hour drive ahead of me. Where is that guy with the paperwork?

The nice thing about built-in alarm clocks is they have the opposite of a sleep function. At least mine does. That’s when you wake up before the alarm is set because your subconscious doesn’t trust real alarm clocks on account of not using them much. I imagine a mostly unused alarm clock might be passive-aggressive when it comes to big events. Plus I’m not sure I even know how to set mine properly.

There’s no taking chances when you have to meet a group of people two hours away at 6:45am on a Sunday morning and you have the parking pass. The rental car dream was a big red flag, so I got up before the alarm did or didn’t go off and I went downstairs to make coffee and mentally prepare for the big 10K.

A 10K is 6.2 miles, which I’d run a half dozen times since late August. My favorite run was also the first one I did along a flat and shaded roadside to an abandoned watchtower on the Delaware coast. On all my practice runs, I paused my running app so the clock wouldn’t roll while I snapped pictures, a hobby that paired nicely with running this summer.

This was the summer of running for the enjoyment of it. Actually, I forgot that I wasn’t going to call it running anymore. I jog. What happened when I went out for sporadic, leisurely jogs and left the timing gear at home was I got slower. Like, a minute-a-mile slower. I started tracking my pace again around the time I started 6 mile practice runs, but I never got faster.

I was nervous going into this race. The night before, we all got an email from the organizer that basically said “Look, we better tell you right now: expect long lines and delays. In case you didn’t know, you’re not the only one doing this race. You’ll be running with 20,000 other people. Twenty thousand. So take off the crown and just show up and enjoy yourself.” I thought it was the kind of email that might be helpful to get every single morning.

It turns out, the race was extremely well organized. I met my baby sister and her running buddies right on time and we parked at the nearest shuttle stop and were whisked off to the start line. Here I am in the only pair of sunglasses I seem to have left after summer, with the stunning Bay Bridge in the background, plus what looks like an unsuspecting woman getting ready to take a swim. 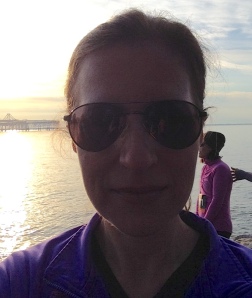 The course was 4.35 miles of bridge, plus some mileage before and after to make up the 10K. The bridge part was absolutely amazing. At the midpoint, we were hovering 186 feet above sea. There were telephones and sobering signs for a suicide hotline. My sister said she looked over the side at the top, but I didn’t dare. We were so close to heaven. This is where I hit my peak, the part in the run where I felt strong enough to keep going to the finish line and maybe forevermore.

Then mile 5 came. For some reason, I was still chewing gum I’d had since the drive down. I didn’t want to throw it over the side of the bridge and hit an unsuspecting seagull, and suddenly this old gum felt like an albatross, a real liability I was lugging towards the finish line. My mouth was desert-dry and I a little panicky. This is where I wanted to walk so bad. Then a song came on my playlist that made me keep going.

I’m superstitious about using the shuffle feature during races. One reason is that it’s really hard to get my phone in and out of a running belt (more on that in a bit) to skip songs, but I also think the songs talk to me at various points, and often when I need to hear them the most. Around mile 5.2, when desert mouth hit and I noticed a hill looming in the distance, Ray of Light came on. I don’t even know I’d ever listened to the lyrics before, and then in my about-ready-to-give-up-and-walk state, I heard this:

I happened to be jogging alongside an airport with grounded planes that were “flying” faster than me, so I got a case of the chuckles, which are like giggles for delirious, tired people. Then trying to remember where it all began brought it home.

Awhile back, I wrote about how driving across the Bay Bridge in the worst hungover state of my life indirectly, and not until many months later, led me to remove the demon alcohol from my life. Running over it sober, healthy? This was a big deal for me. I did remember where it all began and in that moment I was like “okay Universe, thanks buddy” and kept dragging towards the looming hill and heaven.
I got this when I crossed over. The finish line, I mean, not heaven. Maybe they give medals in heaven too, not that I’ll probably find out.

I had the best cup of coffee in my life after the run. I got a space blanket, which I thought they only gave out for marathons, but I took mine because a 10K is as close as I’ll get to running a marathon.

The coffee wasn’t free, but luckily I’d brought a twenty dollar bill in my running belt. Remember the post where I shared the preachy, tragic short story I wrote when I was 11? Well, it almost came true.
While taking out my phone at the 1.5 mile mark to take a blurry picture of my feet or something, my precious $20 fell out! Now, I might let a $5 spot go, but not a $20. I nearly took out two unsuspecting runners in a mad scramble to pick it up. I feel really bad about that part and only later did I make the connection that I very nearly died, just like 11-year old me predicted.
So the run is over and I had such a wonderful time. It was amazing and empowering and all the things I’d hoped it would be, despite the race organizer’s low-expectations email. The best part was getting to spend time with my sister, who I don’t see nearly enough. After the race, we cleaned up and went to lunch at a fun place on the water with her husband and sweet baby boy. These are the precious moments, you know? This is what life is all about.

32 thoughts on “Beat the Bridge”