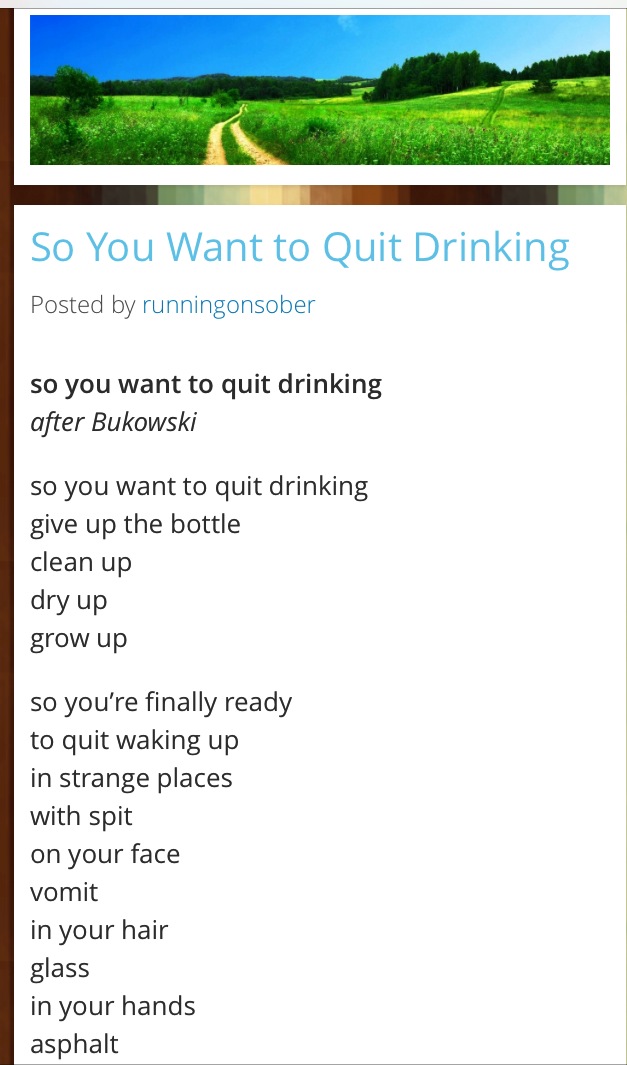 Occasionally I get emails from people who are thinking of getting sober but aren’t quite there yet. I love getting these emails, but they scare me a little too because I want to tell them it’s fine here in Soberland – better than fine, even peachy keen most days – but I remember that jumping off point and how little I thought about it before making the leap. My counselor at the time told me to get to AA and I blindly did that and it just so happened to work for me in those early days. I went to meetings and I soaked in the stories and feeling of support and hope, and sobriety just kind of blossomed from there.

But what about those people who don’t believe AA will work for them? I know numerous people who got and stayed sober without setting foot in a meeting because it didn’t appeal or sometimes didn’t occur to them. They took up blogging or yoga or painting or running or chocolate – sometimes all of the above – to fill that god-sized hole that people at meetings talk about all the time, but of course they don’t know that because they’ve never set foot in one. Is their approach any more doomed or less-than compared to a 12-step recovery program? They certainly don’t seem to think so.

And what about someone who already went the AA route and doesn’t want to go it again but fears there is no easier, softer way? This isn’t a deal breaker. I believe there are as many ways to get sober as there are to go about your day. You can wake up and drink and lose most of it in blurriness and blackout regret or you can choose not to drink and read a sober book or blog or email a sober stranger instead and start to build your sober support network. And not drink. That last part is the only thing you absolutely must do if you want to stop drinking.

In the meanwhile, if you’re thinking of not drinking and aren’t quite there yet or you just want to read a poem about how to climb out of hell, Christy at Running on Sober cranked this out in a bout of sober insomnia. I’ve been up since 3:30 and all I wrote was an essay about carrying a metal Holly Hobbie lunchbox to school  and fighting over a tire swing for my daughter’s first grade class (my daughter just asked who’s Holly Hobbie?). Some of us make beautiful music, some of us clank around pots and pans. It’s still sober, and sober is pretty awesome, let us be the first to tell you.

13 thoughts on “No dealbreakers here”