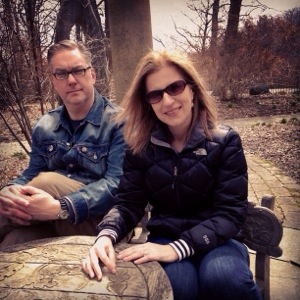 I then worried when I quit going to meetings and dropped my sponsor and stopped working steps. This makes all those other worries seem moot, but there is one worry I’ve carried consistently and I don’t write about it much because it involves another person.

I worry what it means to be married to a drinker and have access to a fully stocked bar in the kitchen. It may not be ideal to be around alcohol all the time and, in fact, it might be a terrible idea for some people trying to quit drinking. But it can be done. It can feel really challenging at times. It isn’t black and white. The real stuff never is.

The reason I’m writing about this is because two things popped up this weekend.

The first thing was we had lunch as a family in this lovely indoor picnic spot, which probably sounds strange but spring is still more lion than lamb in these parts. We almost had the place to ourselves except for an older couple lingering over lunch and a big bottle of wine. They noticed the specialty beer Joe was drinking and the guy even walked over for a closer look at his bottle.

Would anyone even do this over food? It’s a secret language, this shared love of craft brews and fine wine. I used to speak it and still understand, though I sat sipping coke zero from a plastic cup almost wishing it was a sissy juice box. Go ahead, make fun and I will cut you. Seeing older couples enjoy a big bottle of wine together is a trigger for me, apparently. I am mourning a future Joe and I have not had, nor will we ever if I’m lucky.

When the kids are grown, we’ll never get to tour wine country or swill beers from matching steins in Germany or linger over a big bottle of wine in an indoor picnic house. I blew it and that’s a fact and a blessing and, well, because it’s both it feels complicated.

But the fact is I don’t mourn anything about my decision to get sober 2.75 years ago. And Joe and I get along better than we have in years. I find more patience and joy in the little things and the best kept secret about sobriety is that everything is just as fun without alcohol. Even moreso without the hangovers and guilt. Some of you are nodding your head in agreement and some have it cocked to an odd angle because maybe you’re not there yet, but you’ll see too if you hang in there. I had to see it to believe it.

The other thing that popped up this weekend is a friend who is newly sober told me she shared with her boyfriend that she wants to start going to recovery meetings and was touched and maybe even a little surprised by his support. He still drinks. Oh man, do I get this.

When I told Joe I wanted – no, I probably said needed – to stop drinking, he looked surprised and/or skeptical, but he didn’t try to talk me out of it. He has been my strongest pillar of support aside from the overwhelming belief deep in my core that I am doing this for a reason that matters more than I can possibly understand.

Joe used to rush home from work on Tuesday nights when I wanted to make a certain recovery meeting. He still makes it work when I want to go on longer runs on the weekend. He buys fancy schmancy waters and green teas and copious amounts of jelly beans because he gets that enabling my other addictions might very well save me from the one that could kill me, or, worse yet, kill what we have now.

I would be lying if I didn’t say I hate that he still drinks sometimes. In that same picnic house, I could smell his beer and hated how good it smelled. I wish the smell made me sick or, better yet, did nothing for me at all. But I have to imagine if I’d given up chocolate for the last 2.75 years, it still would smell pretty fucking good. If I have to look for a silver lining in being around it constantly, it is that it reminds me how powerless I still am and will always be. It still smells just as good and I would still fall sideways into drinking if I tried moderating just one more time. Nothing has changed.

Most days when he drinks I only notice that he is drinking. I usually don’t pay mind to what beer or cocktail or how many. My brain has made alcohol invisible or at the very least translucent as a kind of coping mechanism. When he’s hungover and crabby and impatient, I know the cure for that. But I also know sobriety is a very individual choice and it’s a gift that not everyone gets or it’s a choice not everyone takes. I feel lucky I got the gift and took that choice, and I wonder if Joe took it, would he also threaten to dump clothes out the window like I did that time in early recovery when I was stuck in the seemingly insurmountable swamp of sorting out our youngest’s closet? Recovery is hard work, yo.

Not my gift to give, not my decision to make anyway. We might make another 17 years with him still sipping beer and me whatever zippy name the future calls diet soda. Today I am oh so grateful for the subtle ways sobriety has smoothed out my rough edges and the layered effects it’s had on our marriage.

55 thoughts on “He drinks and that’s cool, though it might also be the jean jacket”