I wrote the following bit last January, shortly before I took up running. I was a little over 6 months sober at the time. I thought about it this morning when I went running past the house with the Peter Rabbit statue. The old house with the mean dogs changed owners and is currently under renovation…probably being flipped is my guess.

I found out the hoarder house belongs to one of two spinster sisters. The other lives in the house across the street with the tangly yard. They both spend most of their time at a vacation home in the Poconos.

You can learn so much in a year.

If you’re newly sober, I’m not advocating that you take up running or being nosy. Reading or rollerskating will do just as well if they keep you engaged and challenged. I’m just grateful I harnessed the restlessness I felt at the time. I think running saved me in a lot of ways.

p.s. I still haven’t spotted those white deer since.

p.p.s. You’ve probably already seen this link on other sober blogs, but a graduate student asked if I would post a link to a survey for married couples where drinking has been an issue of concern. If interested, go here!

Every day I do 30 minutes of exercise, but it’s all very old-lady like, so that’s probably why I’m not cut and buff and ripped and all those hard words fit people throw around.In the basement I have an elliptical machine I bought with my bonus check four years ago. It runs on two D batteries and I only ever put it up to level 3 because level 4 feels like trying to walk through sand up to my thighs. It slips off track if I use the arm levers, so I don’t use the arm levers. I read and tread in small, slightly resistant circles for a half hour to work up a fine bead of sweat and then finish up with 120 situps. I know that sounds like a lot of situps, but I do them on a situp bench, which is like doing 10 situps on the ground, only it’s easier.

My preferred exercise is a 30-minute 2-mile lap around the neighborhood behind where we live. It’s the sort of workout your grandmother could keep up with, plus we would have a lot to talk about during our walks.

For about a month, I saw two white deer almost every time I walked. I only managed one fuzzy picture of one from far away, but I swear they were real. I haven’t seen them in months, though I always look. 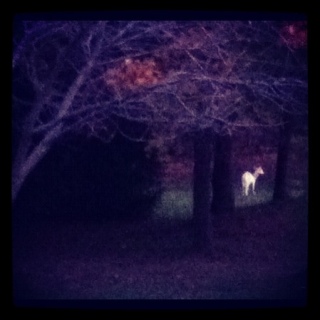 This is my favorite house to walk past. It’s a hot mess of old cars, plus someone spray painted Ball Star on the basketball backboard. It’s right across from a park where someone defaced a baby swing by painting a cartoonish penis on the front. To tell the truth, I never much noticed the penis until my older kid pointed out one visit that it was no longer there. Where did the penis go? So many mysteries.

Sometimes when I walk, I see moving trucks and feel like I’m losing a neighbor, though I don’t know them and it’s not even my neighborhood. Once I saw a man in his late 50s bring a box of loose this-and-thats out to a U-Haul trailer. I’d never seen him before, but I knew his house because it was the one with the dirtpile backyard and two mean-ass barking dogs tied up to weak-looking ropes. I transferred my dislike of the dogs to the man and imagined his wife finally had enough of his mean ass. I saw a pickup truck pull up and the man walked over with his box still in hand and talked with whoever was inside – an older couple – and I walked on because it was not my neighborhood or my neighbor or my business.

When I turned and got to the end of the next street, the pickup truck drove past and pulled into the driveway of a house I knew because I’d seen the guy walking his schnauzer before and both were very friendly. Days later, I was surprised to see this Peter Rabbit statue in the friendly man’s yard because it used to be in the mean man’s yard.

I wondered if their conversation had been about the statue.

“Jean told us you’re moving out. Patty and I are just so sorry.”


“Yeah, that bitch can go to hell. You want this fucking rabbit? If you don’t, I’m going to break it into a million pieces and feed it to the dogs.”

Though what kind of mean man has a Peter Rabbit statue in his yard? It is possible I snap-judged him wrong.

Maybe you think I’m too nosy, and this may be. At least I’m not like the neighbors who came outside to openly stare when police pulled up and walked to the front door of the house where an old woman lives. I’d seen her many summer nights sitting in a camp chair in front of a one-car garage, which was open and packed to the ceiling with crap. It was all stacked neatly, like some impossible game of Jenga because it was all real stuff like broken chairs and tea kettles and empty wooden frames and folded army tents.

The policeman wore a brown short-sleeved shirt and brown shorts. I had no idea policemen could wear shorts until that night. I was walking past – staring discreetly, not like those neighbors – but I saw the policeman talking and pointing to her open garage in a respectful, almost apologetic way that made me feel equally sorry for him and the old lady. Hoarders is my least favorite show of all time, outranking even The Beverly Hillbillies, so the whole short scene just about broke my heart.

Lately when I walk, I feel like I want to start running. Maybe it’s boredom with routine (though the route has plenty of hills, so it’s challenging) or maybe I’m anxious to get back and get things done (though the down time and fresh air are wonderful), or maybe I don’t want to see any more heartbreak in things.

If I go by faster, things will look different and I will get a better workout. I’m ready for a change.

15 thoughts on “An old something I wrote”