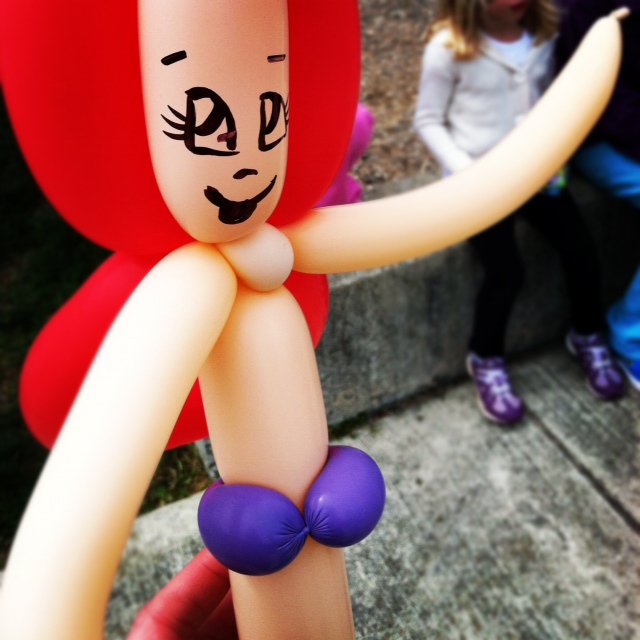 I’ve decided in the back of my head that once I hit one year of sobriety, I might stop going to meetings. I’ve thought this for a little over a month now, and I’m honestly not sure what my motivation is. I don’t want to drink again. I think I’m just afraid to get more involved and the group mentality is starting to turn me off. I technically should keep my one-year secretary commitment, and I probably will. I’d also like to stick around through August because my home group will celebrate its 20th anniversary and there will probably be cake (more on that in a bit). It’s a small group, really. We meet at a church about a mile from where I live. The first spring we lived in our house, we bought an oversized novelty wine glass at this same church when they were having a rummage sale. The irony of this escaped me until just now.

My kid’s birthday party went just fine and the clown did a fantastic job painting faces and twisting elaborate balloon creatures to life that popped a lot less than I was expecting in the bitter cold the day turned out to be. The clown showed up without makeup because she confused me with another client who specifically requested she come that way so the younger kids (and parents?) wouldn’t get scared. She looked like a nice, normal woman in a ponytail, dangly earrings and black pair of those athletic shoes that are supposed to give you a nice butt. I was equally disappointed and happy that she came looking less like a clown and more like someone’s mom. She made some really wonderful things with balloons. The kids seemed to have a great time and kept asking to take their jackets off because they were too warm. My grandmother kept complaining about the cold and how far away we live.  The party was a mixed bag.

After the party was over, I failed to feel the flood of relief that it was over. I sat on the couch that night watching a dumb movie and waiting for the relief to wash over me. In the movie, the main characters kept meeting at a bar and the camera kept showing them take thirsty gulps of beer. This bothered me almost as much as my inability to feel relief. I can best describe it as feeling restless. I’ve always been irritated when people say “life’s about the journey, not the destination” but I have this phrase stuck in my head. There is a lesson in all of this that I am just starting to make out beyond blurred edges.

Since mid-March I’ve lost 11 pounds through a combination of eating and running. Not at the same time, though that would be pretty awesome. I am about 5 pounds from my goal weight so naturally I celebrated by eating a bunch of cake this weekend. It strikes me that the way I binge on sugar is like how I used to drink. Something about wanting something and indulging with no thought to consequences is so seductive. It’s a I want what I want when I want it kind of thing. With cake, I can not eat cake the next day and get on the treadmill and sweat away a serving of cake, which, eww, sounds gross, sorry. But I can’t treat alcohol as casually. It is absolutely true that my relationship with alcohol over time always got worse, never better. The verdict is still out on cake, but I am sure I will keep testing my limits there. The only thing I have left after that is porn and nail polish, and I will be holding fast to those.